At first, I was going to include this film in an article about a couple of other promising women streaming right now, but after I saw it, I thought it deserved a singular moment. Still in some actual movie theaters, but also On Demand and streaming on Amazon Prime is Promising Young Woman. I’d wanted to see it for a while, but not at the 20 bucks a pop both services wanted (it’s extra on Amazon, even for Prime members). I was blessed with a pass for a virtual screening, including a Q&A session with writer/director Emerald Fennell, and star of the film Carey Mulligan, so I signed up. I didn’t know what I was in for. A revenge movie from the point-of-view of a real woman, this isn’t Last House on the Left, but it’s no Lifetime movie either.

Considered a dark comedy, Promising Young Woman is the story of Cassandra Thomas (Carey Mulligan), a med school dropout who works in a café owned by Gail (Laverne Cox). Still living at home, Cassie turns thirty during the course of the film, and seems to have no ambition whatsoever, or any friends for that matter, with the exception of Gail, who thinks she should seek more challenging employment. But Cassie says she’s happy working at the café, and what she does have is a penchant for revenge. Cassie’s only friend since childhood, Nina, had been sexually assaulted and raped at a frat party while attending the same med school as Cassie, and while she was blackout drunk. Even though she’d named her assailants, Nina’s own state of being was called into question, and coupled with lack of evidence, the perpetrators were allowed to go free. This caused Nina to drop out of school, and Cassie along with her in order to take care of her friend. While it’s never actually stated, it’s implied that Nina eventually committed suicide. 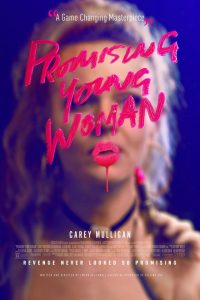 This sends Cassie on a mission; to seek and destroy men who take advantage of women who aren’t in a state of mind to give consent. She trolls bars, pretends to be drunk, and when a man eventually gives her a ride, making a detour to his place, she instantly sobers up once she says no, but he insists on yes. We’re not always sure what happens after that, but it doesn’t seem to be anything lethal, and she occasionally comes across the man who doesn’t try to follow through, to whom she simply gives a stern lecture. She keeps a tally in her notebook, but she also has another record written down; that of those involved in Nina’s assault, from the perpetrators, to the Dean of the school, to the defense lawyer, and those who stood by and said nothing. And she has a special punishment for each one of them. Oddly enough, she also finds love along the way. While it definitely has many funny moments, the emotional roller coaster ride I went on with this film was unprecedented for me.

There was the part of me that was totally with her on her mission. I don’t know one women who hasn’t had an experience with sexual assault in one way or another, and some of the scenes were difficult to watch for that reason. Another part of me thought this was all a bad idea. Cassie might not be drunk, but she’s alone, and putting herself in what could end up being a dangerous situation over and over. It’s one of those times where the lines between bravery and stupidity become blurred. I couldn’t help but cheer inside when a couple of Cassie’s med school targets got a taste of their own medicine, but Cassie’s methods were at times questionable, and it made me feel like a bit of a creep.

In reading reviews on the film, the biggest disagreement with the plot seemed to be Cassie’s insistence on righting a wrong that the victim had never asked her to right; a plan to which she isn’t there to give consent. I’ve had friends stay angry at someone who wronged me long after the expiration date of my own anger, and found it more amusing than anything else, but it was never for anything so life-altering. Possibly the closest person to Nina, her mother (Molly Shannon), suggests that Cassie let it go, for all their sakes. As Dana Stevens from Slate said, “Cassie’s quest for retribution… is not on her own behalf but on someone else’s, someone who never asked to be avenged in this way and who, one could imagine, might have valued her best friend’s safety and well-being over such a high-risk performance of symbolic justice.” But while Cassie is putting herself in an extremely dangerous position should things go sideways, that isn’t what the movie is about. It’s not about the terrible acts done either, but that the people who do them, aren’t always terrible people. During the Q&A, Fennell said the film was about how people we like do horrible things, and sometimes those people are us. That made sense, since one of the most emotionally fraught moments for me was finding out a character I liked hadn’t been what we thought. Okay, I burst into tears. The defense lawyer (an excellent Alfred Molina) is probably the most decent one of the bunch, having realized the horror in what he did, and being willing to face retribution, but he becomes a decent person after the fact, albeit perhaps because of it. Gail comes out unscathed, but that might only be because there isn’t a deep enough dive into her character. 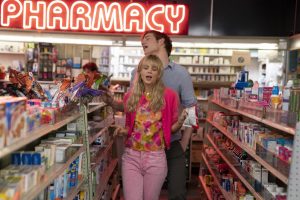 The casting and acting are brilliant, and my hat’s off to the men who discarded their usual heroic personas to play distasteful characters, in particular Adam Brody (Jerry) and Max Greenfield (Joe). Mulligan plays the hell out of Cassie, who’s riding the same emotional waves as the audience. One of the things Mulligan mentioned during the Q&A was that Fennel gave her character details that affected her acting choices, even though those details were not in the film itself, and were kept private. This is a wonderful technique for a director to use, as it gives the actor’s interpretation more dimension, even though the audience isn’t privy as to why. I was in an acting class where this was used, and the difference it makes in a performance is amazing. The film was shot in 23 days, which is a testament to Fennel’s tight direction. It’s filmed beautifully, with interesting camera angles, and there’s a stark contrast between Cassie’s brightly lit, colorful day life, as opposed to the dimmed down, darker nightlife she inhabits. The soundtrack is notably eclectic; from an intriguing version of It’s Raining Men sung by DeathbyRomy, to a downright eerie strings-only version of Brittany Spears’s Toxic, played as Cassie heads for her final revenge. The wardrobe is spot-on, especially Cassie’s multi-colored Candyland way of dressing in the daytime, and no detail is left overlooked.

I’m not going to tell you the ending, except to say, it’s shocking and bittersweet; sad, yet triumphant. What starts out as a darkly humorous joyride, with a side of vengeful grief, ends up posing more questions than it gives answers, and some are questions we need to ask ourselves. What is it we’re willing to accept? What is it we’re willing to ignore? What is it we have to own up to, and do we need to take responsibility for the past before truly moving forward? Promising Young Woman is a fable for our time, the moral perhaps being that nothing is really as it seems in life. It challenges us to look inward, and realize we might not be the promising good guys we thought we were.