Utopia Earns Its Place
in a Crowded World 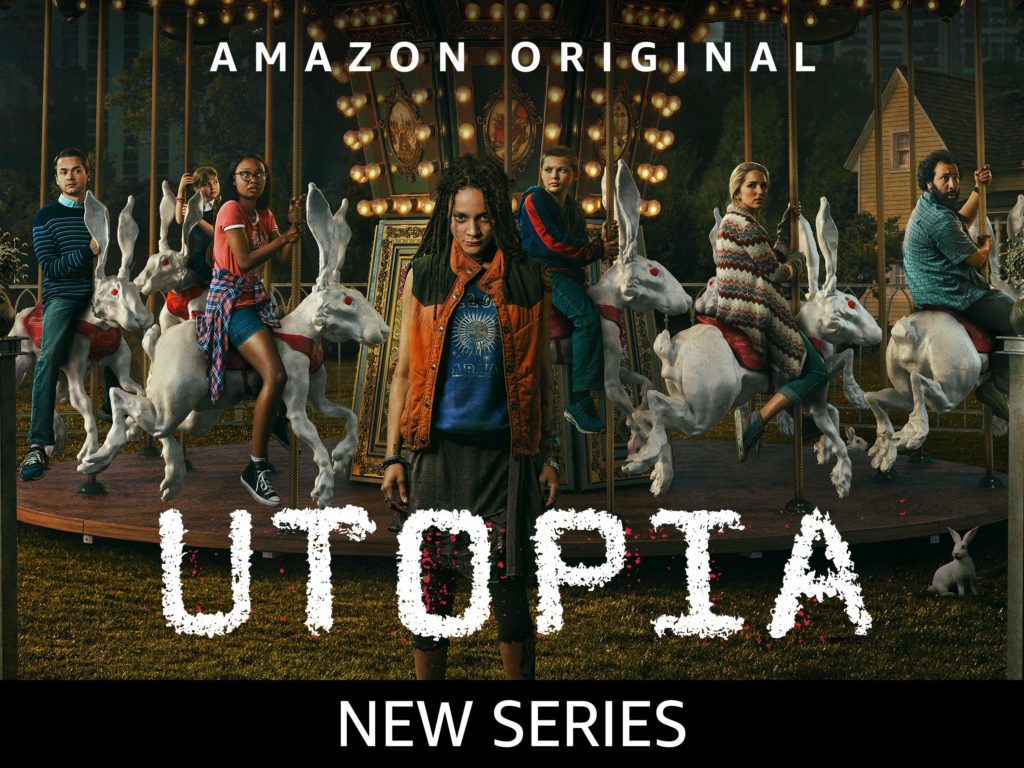 At the beginning of every episode of Utopia, there is a disclaimer that this is a work of fiction. It is not based on fact. At least we hope it’s not.

Utopia is the story of a viral pandemic and conspiracy theories. It’s understandable why a disclaimer would be added, and it also makes sense why some people would not want to see it right now. Slate’s Matthew Dessem went so far as to call it “spectacularly ill-timed.” A remake of a 2013 British Drama, the new Americanized version, written by Gone Girl author Gillian Flynn, is now streaming on Amazon Prime. Originally picked up by HBO, budget concerns caused them to let their rights lapse. Amazon wanted its own version of Game of Thrones, and decided to take a chance on it. In the past, I’ve been disappointed at American attempts to remake British television (Being Human and Payne – our version of Fawlty Towers – for two), and would rather hope for the original to land on BBCAmerica, so I approached Utopia with some trepidation. Once I started watching, I couldn’t look away, and not in the horrifying accident kind of way. Fifteen minutes in, I was in.

My getting hooked early on might have had something to do with the beginning taking place at Fringecon, a comic book convention where several of the main characters meet. I love conventions, and this was probably the closest I’ll get one for a while, since they’re no doubt considered deathtraps right now. But what starts off innocently enough, turns dark pretty quickly.

There are several plotlines that intertwine, but all of them lead to the comic book Utopia. Utopia is the sequel to Dystopia, a series of comic books that some believe contain clues to a real life conspiracy. Characters Ian (Dan Byrd), Becky (Ashleigh LaThrop), Samantha (Jessica Rothe), Wilson (Desmin Borge), and Grant (Javon “Wanna” Walton) have discovered hidden symbols in Dystopia that predicted real life viral epidemics, and they’ve been participating in an online message board where they’ve been discussing their theories. These are some pretty smart kids, since I never would have put two and two together and come up with SARS, or been able to count leaves on a tree and connect them with an Ebola outbreak in Zimbabwe. The villain of the comic is Mr. Rabbit, who heads an organization called the Harvest, and has kidnapped Jessica Hyde, the young daughter of a scientist, in order to force him to create new viruses.

When the chat board group finds out someone is going to be taking bids for the newly discovered Utopia at Fringecon, they decide to meet there, but Grant, who they believe is a mega-rich entrepreneur, never shows up. The couple who have the comic don’t seem to know what they have, but they know people want it. The bidders meet with them by appointment, to be contacted later. Wilson – who’s a germophobe and suffers from general paranoia – tells the others not to give out their hotel room numbers, and insists they be the ones to initiate contact later. Each bidder is shown only a brief portion of the comic, which they discover is an original manuscript, and they’re not allowed to touch it. I totally understood this, since I had a friend who was a collector, and if you wanted to look at his comics, he turned the pages. While the couple is distracted, Ian takes a photo of the page revealed to him, and shows it to the group. The other bidders are mostly cosplayers, until Philip Carson shows up, tossing $20K on the table and walking away with the comic. He’s also left his card, which says he’s in acquisitions and that he lives in the penthouse of the hotel.

In the meantime, a real virus has taken hold out in the world, already having killed 18 children, with no survivors. The group believes the answer to combatting the virus might be in Utopia, and the other plotlines begin to intersect. The virus has been traced back to a product called Simpro, a simple non-meat protein alternative invented by Dr. Kevin Christie (John Cusack). During an interview, Christie insists viruses can’t be transferred via meat, but seems to forget Simpro isn’t meat. Lowly scientist, Michael Stearns (Rainn Wilson), has been defunded for most of his projects, but manages to get his hands on a blood sample from one of the infected children. He gets to work on a vaccine, and also gains the attention of Christie. The running theme among Christie and his supporters is, “What have you done today to earn your place in a crowded world?” and Michael longs to earn that place.

Also hunting the comic are Arby (Christopher Denham) and Rod (Michael B. Woods), an absolutely murderous pair, who shoot first and ask questions later. Except for two questions: where is Utopia, and where is Jessica Hyde? Arby is the leader of the two, and very reminiscent of the villain in many Dean Koontz novels. He’s methodical, mechanical, has zero conscience, and frequently reminded me of a psychotic Sheldon Cooper. He’s probably the most interesting of all the characters, one of my favorite scenes being one where he asserts his independence by stomping on the little boxes of raisins he consistently snacks on. Which is exactly how I felt about receiving them in my trick-or-treat bag when I was a child.

Sam figures out that someone is weaponizing viruses, and the ultimate goal is to end the world. Or at least the world as we know it. A little boy joins the fray, stealing the comic from Carson, and the group finds out that he’s the Grant they’ve been waiting for, Ian pointing out that Grant did use a lot of exclamation points. This leads to an all-out war for Utopia, and when the real Jessica Hyde shows up, the group realizes that the entire comic is all too real. They also find out that Jessica’s father is the one who created the comics, in the hopes they lead to a solution. I don’t want to give away much more, since the plot has more twists and turns than a corn maze designed by Stephen King.

The show is well-crafted, and attention paid to every detail. The comic itself is beautifully drawn; the convention so real, I wanted to be there; and Wilson’s bunker, the group’s hideout for a while, is every prepper’s dream. The soundtrack, much of it alternative and indie rock, contributes enormously to the atmosphere. Even when just an instrumental background, it adds excitement. The shark in Jaws isn’t nearly as scary without the dun-dun behind it, and a good score can make a big difference. The fight scenes are magnificently choreographed, sometimes seeming more like dancing than fighting. The acting is excellent, and Denham is a standout with his fascinating portrayal of Arby. A complex character, Arby goes from one-dimensional and predictable, to a hit man who could turn into friend or foe at any given moment. Jessica even creates some on-the-fly inventions for the MacGuyver in you.

The story is many layered, and the dialogue snappy at times, even quotable. Like when Rod tells Wilson that the organization he works for knows about the real end of the world, and “French green beans ain’t gonna save anybody.” Occasionally, there’s food for thought, as when Dr. Christie tells the group that people think humans are driven by the search for happiness, when “people are driven by the need to know what happens next.” Christie borders on sardonic after discovering, “after seven years, it all comes down to, people are tricky.” The protagonists are flawed, one of them extremely so, and the villains are multi-dimensional, both crucial to a good plot.

Be forewarned, this is a very violent series, and not the zombie movie kind of violence, but the real-looking, getting shot in the head stuff. Don’t be lulled into a false sense of security during the first half hour. If I didn’t know better, and someone had told me this was directed by Quentin Tarantino, I would have believed them. Arby and Rod often seem like Vincent and Jules in Pulp Fiction. My only complaint was, without a Mr. Wolf to clean things up, the group drives around in a blood spattered car, with no outsiders seeming to notice.

“The show is ultimately about conspiracies and about what happens when fringe conspiracies gain mainstream acceptance,” Flynn told Ben Travers from IndieWire. “[It’s] about where we are; that, largely through social media newsfeeds, we’ve turned science and truth into something that can be opinionated – which is incorrect. It doesn’t matter if your opinion is, ‘There’s no such thing as gravity.’ There is. [Also] if you’re taking your medical advice from John Cusack, something’s gone horribly wrong in your life.”

The British original didn’t make it past season 2, despite tons of positive reviews and a myriad of awards. Even though the reviews for Amazon’s version have not all been favorable – although I wonder how much our current state of affairs has influenced that – a second season is already in the works. Not much is known about it, but life has imitated art enough that there may be no new footage until the end of 2021. Amazon also has not ordered it just yet, and may be waiting to see how things pan out, both with real life events and how the first season is received by the audience. Flynn has said she wants to branch out from the pandemic storyline, telling IndyWire, “Aside from whether I want to deal with the current pandemic [in season two], I want the show to move on and go to different objectives.”

In a world rife with conspiracy theories, some of them about the real life pandemic we’re experiencing right now, and an ongoing argument about the validity of vaccines, I get why some people might feel this is not the time. On the other hand, I’d rather watch speculation about a comic book, than get masked up to go out into the real world, and hope I remember to wash my hands sixty times a day. Ill-timed or not, a fictitious pandemic whose source is actual bad guys who can be blown to smithereens, beats fighting an unseen enemy. 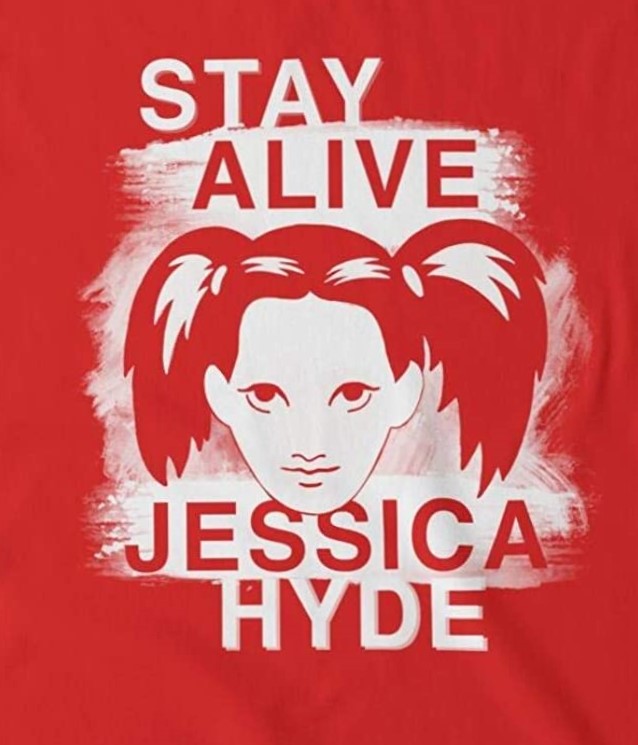 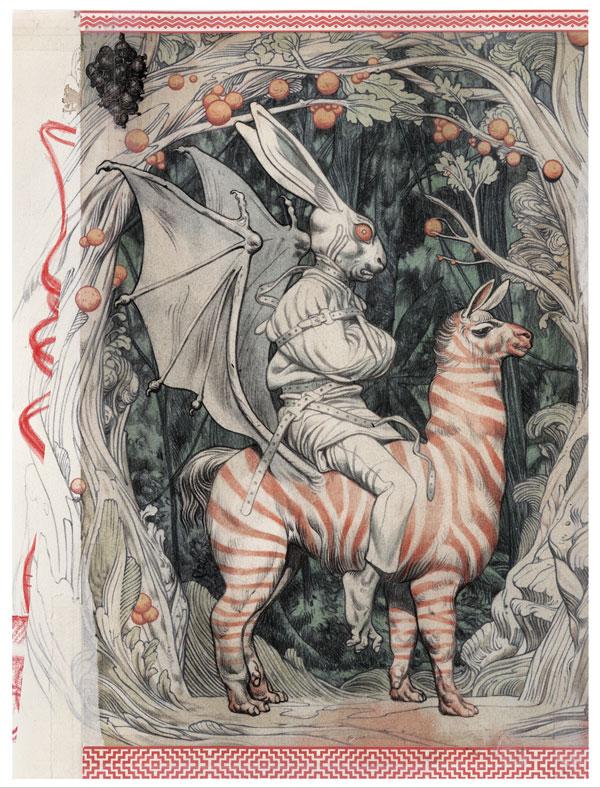