We Have Met the Enemy... 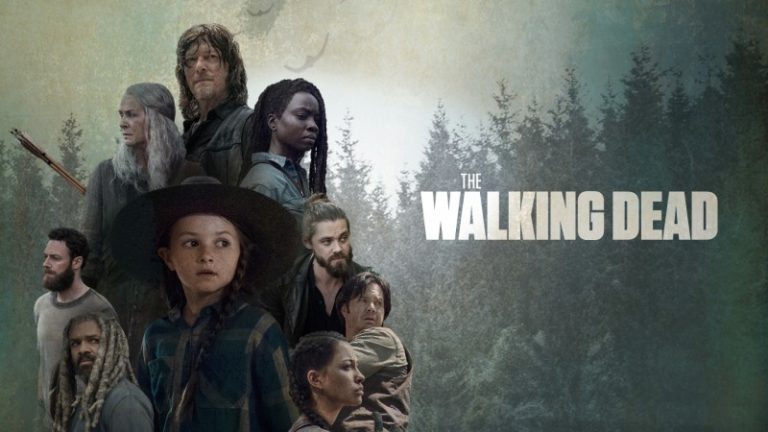 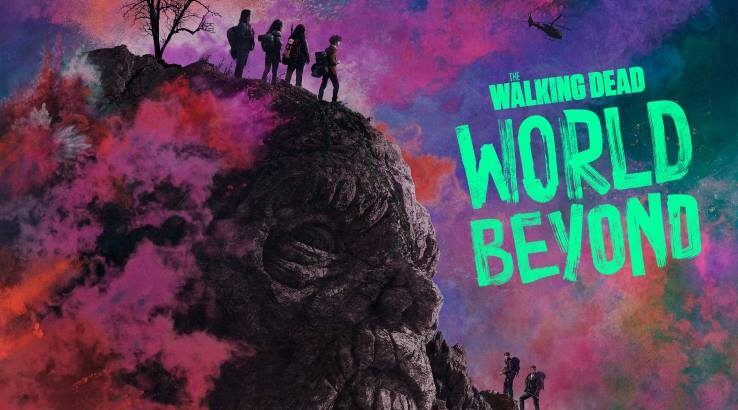 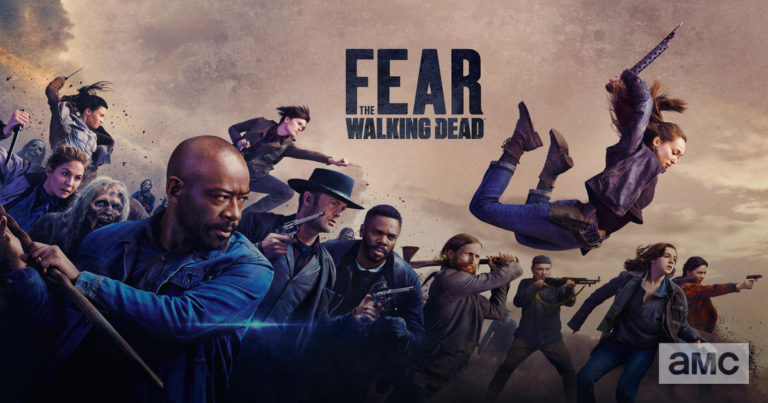 It’s that time of year again, when all the zombies come out, and I don’t mean Halloween. The Walking Dead franchise – or as they more artistically put it, universe – has returned, and brought with it a new show, World Beyond. Warning: possible spoilers ahead if you didn’t watch TWD’s finale, A Certain Doom. Apparently, we’re still calling it a finale, even though showrunner Angela Kang has said season 10 will be extended for another 8 or 9 episodes, to air in early 2021, “if all goes well.” I guess that means, provided we don’t all turn into real zombies before that. If 2020 has taught us anything, it’s that you never know what can happen.

The finale that’s not quite a finale had to be rescheduled when postproduction was delayed due to the pandemic. It sounds like the extra episodes, which writer Kevin Deiboldt describes as “in-between quels,” are a consolation prize for season 11 not premiering in October as usual. The writers have been working remotely, but filming hasn’t started yet, so it’s also a way of keeping the audience psyched. The new episodes won’t be replacing the intended finale, but be more character-driven isolated stories. Personally, I’m hoping for some backstory on Beta, which we didn’t get before his demise, although we did get a tease. As Beta’s mask was pulled from him before he was engulfed by the zombie horde, Negan asked if Daryl knew who that was. Daryl’s answer? “He was nobody.” While that was a nice touch, I was sorely disappointed, since it had been more than hinted at that he’d been a famous musician.

Season 11 will be The Walking Dead’s swan song, scheduled to begin in late 2021, with its 24 episodes stretching into 2022. Even then, that won’t be the end of the original cast. The final season is planned to lead into a spin-off for Carol and Daryl, premiering in 2023. Although they’re fan favorites, my jury is way out on this one, since I’m wondering how the two characters who talk and communicate the least will be leading a show. However, Norman Reedus (Daryl Dixon) makes it sound like it has potential, telling Talking Dead’s Chris Hardwick, “The new spin-off show I’m really excited about, I have to say. I’ve always loved the relationship with Daryl and Carol, and we play off each other so well. It’s a different type of a show. It’s a show of hope. It’s not two groups fighting each other for territory or something like that.”

A fourth spin-off called Tales of the Walking Dead is also in the works at AMC, but is slated to be an anthology series, described by Chief Content Creator Scott Gimple as “an episodic anthology with individual episodes or arcs of episodes focused on new or existing characters, backstories or other stand-alone experiences.” The idea was revealed during the Showrunner’s Panel at New York Comic Con’s Metaverse, Gimple telling the (virtual) audience, “not all of [the subjects] will be characters we knew. Some of them will be brand new stuff.”

Zombies have always been my preferred culture within the horror genre. While the stories are often exciting, heart-in-your-mouth (no pun intended) kind of tales, I love a good illustration of symbolism, and zombies are most definitely that. Zombie narratives are rarely just about zombies. From the beginning, zombies have been used as a metaphor for our deeper fears. Zachary Crockett and Javier Zarracina from Vox said it best: “For 80 years, the undead have been used by filmmakers and writers as a metaphor for much deeper fears: racial sublimation, atomic destruction, communism, mass contagion, globalism – and, more than anything, each other.”

The first zombie movies focused on fear of the unknown, frequently voodoo, a Haitian belief system that included being able to make slaves out of revived corpses. After Hiroshima and Nagasaki, fears of nuclear radiation and communism were catalysts in zombie films, and Nazis were prevalent in both films and comic books. In the 1960s, zombies were a response to civil rights and Vietnam, no film more of an example than the most famous of all, George Romero’s Night of the Living Dead. Ben, a Black man, is the hero of the film, which was released five months after Martin Luther King Jr.’s assassination. Throughout the film, Ben’s interactions with white authoritarian Harry are racially charged, Harry feeling his power is being usurped. In the end, Ben survives only to be shot by a group of zombie hunters, who pose for pictures with his body, a scene reminiscent of the Ku Klux Klan. During the 60s, it was also the first time zombies were shown in hordes, rather than just a scattered few, paralleling the first time Americans were exposed up close and personal to war.

By the end of the 1970s, previously unidentified viruses, like AIDS and Ebola, entered the public arena, and another fear joined the zombie universe, that of contagion. In 1980, George Romero returned with a sequel to his first zombie masterpiece, with Dawn of the Dead, my personal favorite, combining contagion with consumerism. While the 2004 remake is good, it doesn’t have the same feel without the hedonistic context of the 80s. Romero’s group of protagonists holes up in a shopping mall, where they have everything they need. While clearing the mall of the dead wandering around it, one of the characters says, “They don’t know why. They just remember. Remember that they want to be in here… [It’s] a kind of instinct, a memory, it’s what they used to do.” Like Shaun (Simon Pegg) couldn’t tell office workers from zombies in the beginning of Shaun of the Dead, it’s hard to tell a throng of shoppers on Black Friday from a horde of zombies. (While that won’t be happening this year, I have every confidence bargain hunters will be back in the malls clamoring at the sale bins again one day like zombies feeding.) In Resident Evil, a pharmaceutical company has developed a bio-weaponry virus that brings corpses back to life, and in World War Z, zombies climb up the Western Wall in Jerusalem like a bacterial infection. Zombies started to move faster, embodying our fear of an appropriation by the enemy, which was often considered to be immigrants. In his book Zone One, Colson Whitehead pulled no punches with his main character Mark Spitz telling us, “There were plenty of things in the world that deserved to stay dead, yet they walked.”

With shows such as Walking Dead and Z Nation came our post-apocalyptic fear of each other. I’ll never stop mourning the cancelation of Z Nation, as I like a dose of humor with my zombies. It had both heartfelt and heart-pounding moments, and the core group didn’t stay stagnant. Unlike TWD, they kept on the move, their mission to get a man with viral immunity to a lab in California from Washington DC. While at times almost cartoonish, it seemed to me to be a more realistic view of what the world would be like, the group coming upon various tribes of people, each dealing with the apocalypse in their own way, be it continuing to keep up the 9 to 5 office day, selling snake oil cures, or making a new strain of weed out of zombies.

The Walking Dead has been a roller coaster as far as my investment goes. I was pretty excited about the premier, and the first episode will always be one of my favorites. No one, and I mean no one, can make a WTF? face the way Rick Grimes (Andrew Lincoln) did when he saw the door that said, Don’t Open Dead Inside, then realized the dead weren’t so dead. In my opinion, the problem they had from the beginning was the lack of movement, both physically and emotionally. The show became a depressing one-note affair, that eventually lost viewers. Protagonist Negan (Jeffrey Dean Morgan) came along, spouting better one-liners than Freddy Krueger, and wielding a bat graced with barbwire named Lucille. He didn’t make the best first impression, immediately killing off two beloved main characters, but as time went on, and he became multi-faceted, and also became the villain viewers loved to hate. When TWD birthed poor relation Fear the Walking Dead in 2015, it had a different vibe, and seemed to be the show TWD should have been, but wasn’t.

Walking Dead took an upswing after introducing Ezekiel (Khary Payton), a self-proclaimed king who quoted Shakespeare and had a tiger for a pet. When zombies killed his tiger, and Ezekiel lost his Kingdom, it was possibly the most shocking and depressing thing that had ever happened on the show. Like they say, don’t touch the dog, or in this case, the CGI tiger. Then along came season 9, and TWD started to climb up from the wreckage, beginning with the removal of fearless leader Rick. While many of his followers thought he had died, he’d merely been taken by helicopter to an undisclosed location. I was never a huge fan of Rick’s, a man whose decisions were often based on emotion and whose mood was generally melancholy. With him gone, it gave the other characters a chance to shine, and Negan a chance to be a better man. The Whisperers were also introduced, a band of survivors pretending to be zombies by wearing skin masks and walking with them, led by Alpha, a cruel psychopath who killed anyone who disagreed with her without a second thought. Eventually dispatched by Negan, Alpha’s second in command, Beta, took over, and here we are. 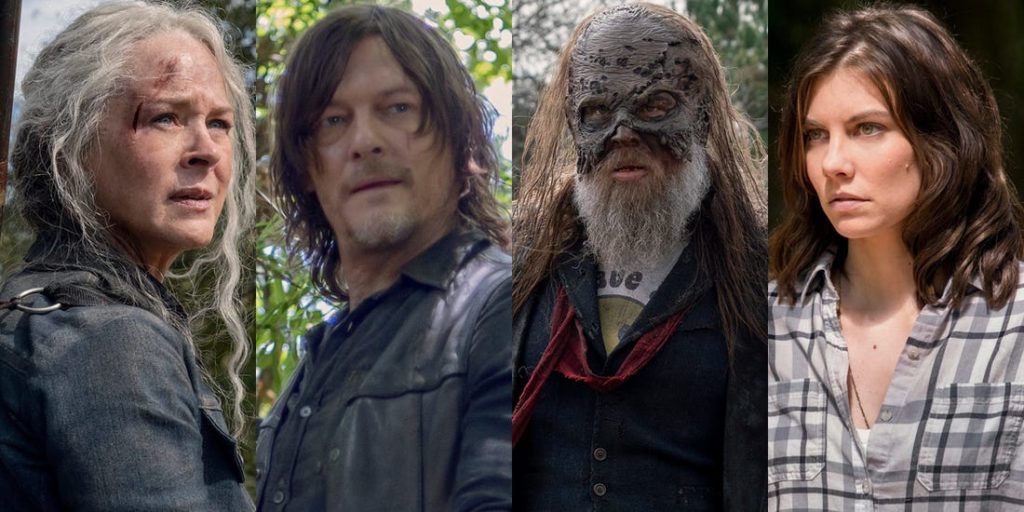 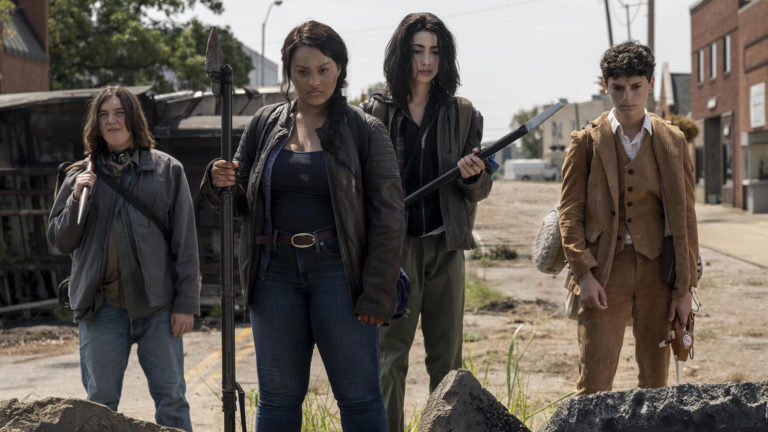 World Beyond is more like the young adult version of TWD. The main characters are high school age sisters who, along with two friends, go on a search for their father. A scientist supposedly working on a cure, he’s been leaving them secret messages, and they know he’s in trouble. It evoked shades of A Wrinkle in Time, except instead of another planet, the group has to go through uncharted zombie territory. They have limited skills, but they’re smart, quick to learn, and loaded with determination. So far, the show has mostly been a lot of set-up, a portion of the story being told in flashbacks, but it holds a lot of promise. It also holds optimism, which has been scarce on the Walking Dead landscape, and something we could all use more of right now.

Ironically, we’ve used a scary thing to make our real fears less scary. The zombie apocalypse has never been more of an allegory than it is today. A virus plagues us, big cities are desolate, and perhaps our greatest fear is each other. When I was a child, in the days when scary movies actually scared me, my father told me it was the live ones you had to watch out for. While he was right, and it’s certainly a thread throughout zombie stories of our time, the other thing those stories have in common is hope. There are always groups of survivors who will band together and fight for the continued existence of humankind.

Like Scott Gimple said about the ending of TWD, “This will be a grand finale that will lead to new premieres. Evolution is upon us. The Walking Dead lives.” And so do we. 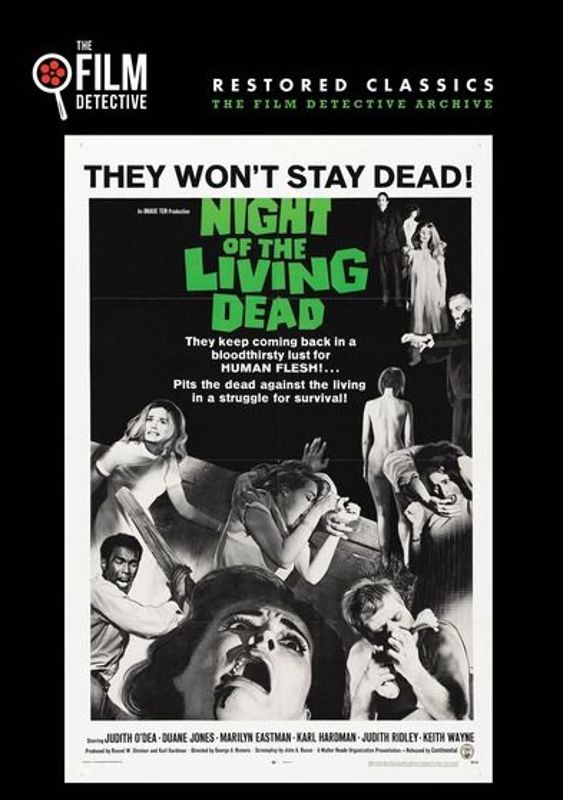