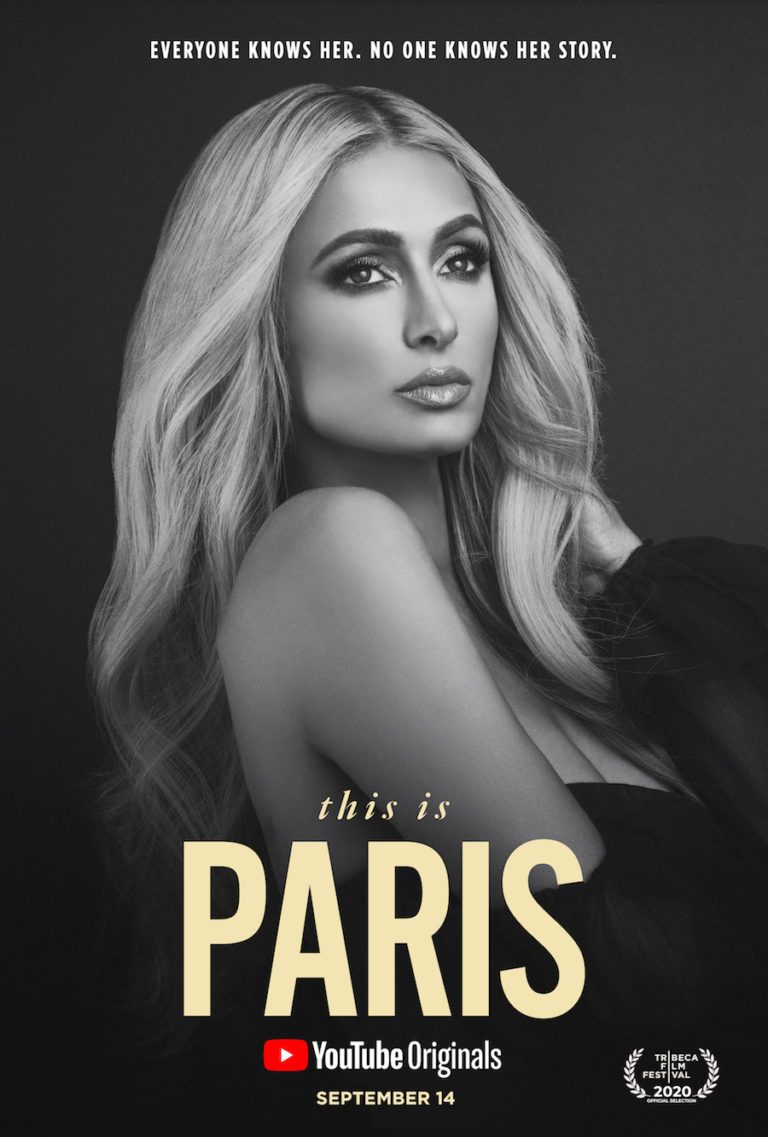 Maybe you think you know Paris Hilton. Maybe you don’t care about Paris Hilton, or have no clue who she is. But you don’t, and you should. She’s more like you than you think, especially if you were abused.

Born in 1981, Paris was the eldest child of real estate developer Richard Hilton (of the hotel fame) and socialite Kathy Richards Hilton (sister of Kim and Kyle Richards, of The Real Housewives of Beverly Hills fame). Paris spent her early years in Los Angeles, but the family relocated to New York City when she was 14, and that’s when the trouble began.

While it seemed like Paris had lived her life in front of the camera, her new documentary This Is Paris, details a secret she’d been hiding since she was a teenager, even from her own family. The public saw a superficial socialite, who told us, “that’s hot,” in a breathy voice. She was one of the privileged, dabbling in various fine arts and reality TV, plugging a beauty brand, her photo plastered everywhere, and never wearing the same outfit twice. There was also the occasional single or book drop, launched simply because of her name. Confessions of an Heiress, which taught me how to wear a tiara, got on the New York Times Best Seller list, and I also admit to owning a copy of The Tinkerbell Hilton Diaries: My Life Tailing Paris Hilton, written by Paris’s chihuahua. The film reveals a whole other side to this jetsetter who seems like she’s always had it all. She’s far from stupid, far from shallow, and very funny. What might be the biggest surprise is that her most striking feature isn’t her fabulous blonde hair, flawless complexion, or polished on-trend look, but her kindness, both in dealing with fans and toward those in her life. In This Is Paris, she’s given the public more than just a glimpse into who she really is, underneath the persona she’s been displaying for years, what she calls a cartoonlike character she’s been playing. In an interview with Hollywood Reporter’s Jean Bentley, Paris said, “At some point in my life I was just looking back on all of it. It was so much fun and it was part of building my brand and everything, but I also know that there’s a lot of young women and men who look up to me and I don’t want to be remembered as that. I want to be an inspiration and a businesswoman.” I can’t imagine it not being exhausting on some level as well.

A free-spirit as a child, Paris thought she was destined to be a veterinarian, as her love for animals was abundant. Nicknamed Star, she said her mother wanted her to be a Hilton, when she just wanted to be Paris. A lot revolved around keeping the family name pristine, and every family flaw was kept secret. In the film, sister Nicky says, their mom and dad were king and queen of sweeping things under the rug. The move to NYC changed everything, when Paris was expected to become like a self-described Stepford Wife. Along with being bullied in school, Paris was sent to etiquette classes by her extremely strict parents. No surprise, she rebelled, sneaking out to clubs and parties. Even when her parents took her credit cards and cell phone away, it didn’t matter; she still managed to party just as hard. Most of all, she felt accepted. Her parents finally decided to send Paris away to an outdoor wilderness program, also known as an emotional growth school. After running away from the first two, Paris landed in Provo Canyon School in Utah. Or rather she was forcibly taken from her home, as her parents looked on crying. Thinking back, Nicky admitted it was a significant trauma, saying, “The mind might forget, but the body doesn’t,” and it can come out later in a variety of ways. Nicky remembers the night vividly, and Paris screaming bloody murder. They both thought she was being kidnapped, and couldn’t understand why their parents did nothing. The next morning, it was as though everything was normal, Nicky being told Paris had gone to boarding school. It wasn’t the kind of family where you asked questions.

The school was a nightmare, and not really a school at all. There was no focus on classes, and the kids were used as slave labor, as well as being physically and emotionally abused. When Paris and a friend tried to make a break for it, after running though cornfields and mountains, staff members caught them, and beat them in front of the others as a lesson. Solitary confinement consisted of being locked in a room naked for 20 hours at a time. After it was discovered Paris was hiding medication she was being given, pills she said made her feel exhausted and numb, she was given solitary. Whenever she tried to let her parents know what was going on, she would be punished, any letters torn up, and told the staff would inform her parents that she was lying and they wouldn’t believe her. Paris said the only thing that saved her sanity was thinking about what she was going to do and who she was going to become after she got out. Which she did at 18, nearly a year later. Not long after that, her infamous sex tape was made, a private moment between Paris and her (then) boyfriend when she was still a teenager. He badgered her into doing it, saying she would if she loved him, and when she was still hesitant, he suggested he call someone else. A couple of years later, he made it public for a price. She’s right when she says, “if it happened today, it wouldn’t be the same story.” She was made into the bad guy after making a bad decision she now believes would never have happened except for her experience at the so-called school, and it took her dream away. “Everyone was watching it and laughing like it’s something funny… I was just so lost and desperate for love that I found it in the worst possible person.” A serious of abusive boyfriends followed. Despite all that, Paris kept to her goal of building her brand, and her business. She no longer wanted her parents, or anyone else, controlling her. She thinks her anger went into her drive for success.

A huge part of Paris’s life is her DJ’ing, which involves a lot of traveling, and being organized. She’s on the move 250 days a year, all around the world, and has become the number one female DJ in the world, commanding a million dollars per gig. While the film follows her to several of them, the biggest is Tomorrowland, an electronic music dance festival held in Boom, Belgium. It spans two weekends, and according to Wikipedia, sells out within minutes. The crowd is massive, 180,000 people, or at least it was until this year when the festival went virtual because of the pandemic. The camera accompanied Paris to Tomorrowland in 2019, and left no holds barred, showing a serious argument between Paris and her former boyfriend Aleks Novakovik. This was brutal, and horrifyingly relatable, as I have no doubt he was trying to sabotage her big moment, an important gig she’d long been looking forward to. She’d been doing promotional press prior to the show, and he’d felt abandoned, saying that she was – wait for it – “doing more promotion for them, than [him].” I gasped out loud when, just before her set, he dropped her computer that housed all the music for it. Pissed off to the highest magnitude, as we all would be, she asked that someone carry the computer who was not going to drop it. I wanted to cry when he continued to follow her, practically onto the stage, until she finally asked that someone “cut his effing bracelets off,” with just seconds to spare. I had mad admiration for her when she hit the stage, pumping up the crowd, a ball of energy and fun, at no time being less than professional. She’s good at what she does, and this girl knows how to work. She has said DJ’ing is when she truly comes alive.

As for the technical side of the film, it’s well done. The editing is great, and combines following Paris in her day to day life for a year, old footage, including home movies, and interviews for the film. The only thing I was iffy on were some animated segments, like when she was taken from her home and sent to Provo Canyon. I’m not sure why this technique was used rather than a reenactment, but it didn’t work as well as I’ve seen it done in other films, like Kill Bill Vol 1. Granted, I’m sure the budget wasn’t Tarantino level. Overall, it’s nicely crafted, concise, and definitely raw, Paris giving director Alexandra Deen the final editorial cut, and asking for no content control. Personally, I thought it was good of her to allow the public to access it for free on her YouTube channel. It has commercials, but they were few, far between, and painless. The film runs for an hour and fifty minutes, and I wasn’t bored once.

There were times when Paris seemed so sad, I thought all the shoes and bags in the world can’t make up for what this woman has been through. We see her talking to her sister, who she’s very close to, and her mother, who, not so much. When Paris told Kathy what went on at the school, which she hadn’t known about up until then, she was supportive, but surprisingly emotionless. I’m guessing this is a lady who keeps a lot of things stuffed inside. Paris also revealed to Kathy the movement she’d started against the school. Contacting and meeting with some old classmates, she began a social media campaign, Breaking the Silence, to raise awareness for problems in the “troubled teen industry.” Their stories of the school were horrific and heartbreaking, and frankly, scary. Paris said she felt like a robot sometimes, and the character she made up, makes her sad. Often called the world’s first influencer, she’s said she sometimes feels like she created a monster.

In the film, Paris tells us the story of her abuse was “never a part of the brand,” and admits her concern that it might affect her empire. I’d say it will, but only in the most positive way. She’s opened herself up, deciding to be real, and the person who had a tough time trusting people and taking them in has taken the public into a world she’s kept private for nearly her entire life. She can now add survivor and warrior to her list of accomplishments, and as she said herself, she’s no longer alone. 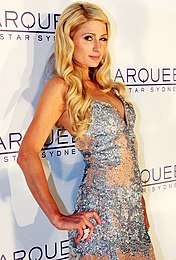 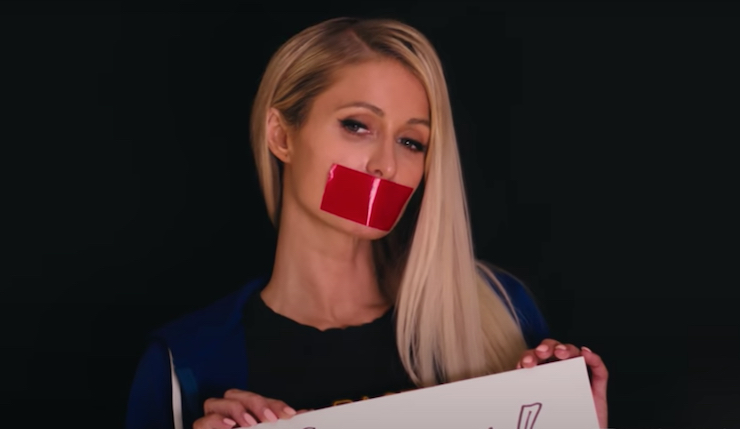