Still Clueless After All These Years 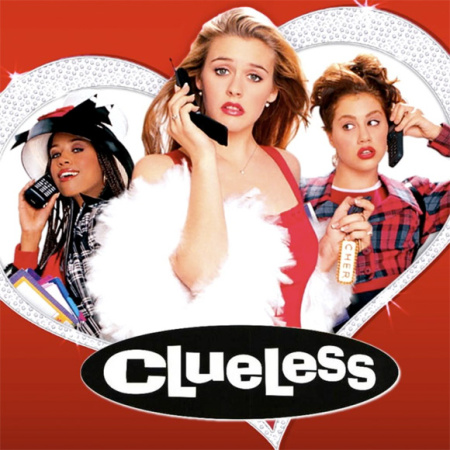 When Amy Heckerling decided to write and direct her own version of Jane Austen’s 1815 novel Emma, set in 1990s Beverly Hills, I doubt she knew it would survive a quarter century, let alone become the iconic film it is. Having already directed Fast Times at Ridgemont High, and also influenced by the 1960s teen surfer series Gidget, Heckerling studied L.A. teens, and began to translate Emma’s world into theirs. According to Heckerling, “[She] started to think, what if there was a teenage girl who, no matter what was happening, couldn’t have her bubble burst.”

Cher Horowitz (Alicia Silverstone) is a privileged teenager who lives in Beverly Hills with her widowed lawyer father, Mel (Dan Hedaya). Cher has no memory of her mother, who died from a liposuction gone wrong, but likes to pretend her mother is watching over her. Cher looks out for her father, and wants to help her friends, like in the book she read in 9th grade where it said, “it’s a far, far better thing doing stuff for other people.” Her first self-made task is fixing up two of her teachers (Wallace Shawn and Twink Caplan, who was also associate producer), and she’s a success, the entire student body being grateful for the improvement in their grades. She pals around with her closest friend Dionne (Stacy Dash), and Dionne’s boyfriend Murray (Donald Faison). Her stepbrother Josh (Paul Rudd), whose mother had a brief marriage to Cher’s father, ends up staying with Mel when there is conflict at home with his mother’s current husband. Cher is all about fashion, not relying on mirrors, but taking Polaroids to confirm her choices. Her next big project becomes New York City transplant Tai (Brittany Murphy), for whom she and Dionne do a makeover. They don’t just change Tai’s appearance, but also her viewpoints, casting aside Tai’s crush Travis (Breckin Meyer), and putting her in the path of Elton (Jeremy Sisto). When Elton turns out to be a creep and makes a pass at Cher, Josh comes to her rescue.

Cher is saving herself for Luke Perry, since “searching for a boy in high school is as useless as searching for meaning in a Pauly Shore movie.” She tells her friends that she doesn’t want just anybody. They know how picky she is about her shoes, and they only go on her feet. Cher ends up crushing on Christian (Justin Walker), and can’t figure out why he’s not interested, until Murray tells her that he’s “a disco-dancin’, Oscar Wilde readin’, Streisand ticket holdin’ friend of Dorothy.” In other words, gay. So instead, Christian becomes her confidant and favorite shopping partner. Tai eventually becomes a little too popular, and ditches the friends who helped her. Cher flunks her long-awaited driving test, the instructor telling her that she can’t park, switch lanes, or make right hand turns, damaged some property, and almost killed someone.

Finally being faced with a problem she can’t talk her way out of, she comes home to find Tai talking to Josh. Tai confides to Cher that she likes Josh, but Cher says tells Tai that she doesn’t think they would mesh well. Tai wonders why she’s taking advice from “a virgin who can’t drive,” and Cher realizes she created a monster. It all boiled down to one inevitable conclusion – she was clueless – and she has a moment of realization that she’s in love with Josh. She suddenly doesn’t know how to act around him, and feels she’s in need of a soul makeover, as Josh is a smart guy and a do-gooder. She heads a campaign to collect canned goods for Pismo Beach Disaster relief, being careful to separate them into entrée and appetizer categories. At a skater league event, Cher and Tai apologize to each other, and Tai admits she does really like Travis, leaving Josh to be fair game. While Josh and Cher help Mel with clerical work on a case, Cher rearranges some files, and Mel’s associate chews her out, telling her that she tanked the case. When Josh defends her, the associate accuses Josh of not paying attention, because he’s too busy “playing footsie” with Cher. Dejected, Cher feels that Josh thinks she’s a ditz with a credit card, and only her father cares about her. Josh tells her that’s not true, and kisses her.

Silverstone was Heckerling’s first choice for Cher, after seeing her in the Aerosmith video Cryin’. (Silverstone was subsequently cast in their Amazing and Crazy videos as well.) When Heckerling spoke with Carrie Frazier, who did the casting for Ridgemont High, Frazier thought the female lead in The Crush was the best choice, and it was a while before they realized they were talking about the same person. When Silverstone first read the script, she thought Cher was materialistic and annoying. Having been raised by a mother who had a distaste for materialism, it was not Silverstone’s world, but when she took a deeper look, she realized there was more to Cher; she was trying to evolve because of Josh. She and Dash were the only real teenagers in the cast, and direction by Heckerling often involved letting the actors “do whatever.” Silverstone said it was hard to trust herself at first, but eventually trusted her director’s process, and became a parody of the Beverly Hills princesses she had known.

As it seems with many successful projects, it took a while to get the teenage comedy to the big screen. FOX held the rights first, but wanted Heckerling to make it more of an ensemble piece and to broaden the boys’ parts, feeling it was too female-oriented. Originally intended for television, when Heckerling changed agents, her new representation thought it was better suited for the movie theater. It next went into Paramount’s hands, where the budget was pared down to $12 million, but when completed, the film was given a push with a line of promotional items, and the trailer shown alongside the Aerosmith videos Silverstone had been featured in. Premiering on July 19, 1995, the film grossed $56 million in ticket sales, alongside Batman Forever, Bad Boys, Pocahontas, and Apollo 13, the only other female lead being a cartoon. Vogue magazine described it as “a glossy teen comedy, biting high school satire, deeply satisfying rom-com, and subversive literary adaptation all at once.”

Considered the definitive teenage movie for the 90s, the same way Ridgemont High was for the 80s, Clueless has also been called the ultimate teen movie. Its influences have been many, from fashion to slang, and it has become a constant reference point. Lupita Nyong’o dressed as Dionne for Halloween in 2018, and even more recently, Killing Eve’s Villanelle used Cher Horowitz as an assumed name in the show’s second season. The film also gave birth to a 1996 TV spinoff, and a 2018 Off-Broadway musical. Domenico Dolce compared Cher’s shopping habits to that of Carrie on Sex and the City, and said, “today Cher would be the perfect influencer.” It changed the face of fashion at the time, grunge having been the main focus, and even today, versions of Cher’s iconic yellow plaid Dolce and Gabbana suit and her tiny purses grace runways from time to time. After the film came out, Bloomingdales senior vice president Kal Ruttenstein said, “I only wish I had done a tie-in. It’ll be required viewing for our juniors buyers.” For the record, Cher had 64 costume changes.

Silverstone has said she had no idea the movie would be as big as it was. She didn’t even know if she’d be funny, as it was her first comedy. When asked what her favorite aspect of the film was, Silverstone said, “what it means to the gay community,” and that she had her own real life Christian in Christian Siriano. She’s amazed at the longevity of the film, and thinks it’s cute that parents who were teenagers then are showing it to their children now. She believes people identify with Cher’s heart and her willingness to change and grow when she grasped how silly she was. People always ask if she’s sick of it, but she says it doesn’t get any better than a film you’re in being liked this much, and Heckerling has said even she’s never let go of it completely.

Since I hadn’t seen the film in many years, I watched it again to get a refresher course. I’d forgotten how good it was. The excellent soundtrack took me back, as well as the references to days gone by. I felt wistful for the time I could go to the mall and browse Contempo Casual. Or even go to the mall at all.

Does Clueless hold up after twenty-five years? The answer is yes. While fashion and trendy vernacular come and go, love and kindness never go out of style.